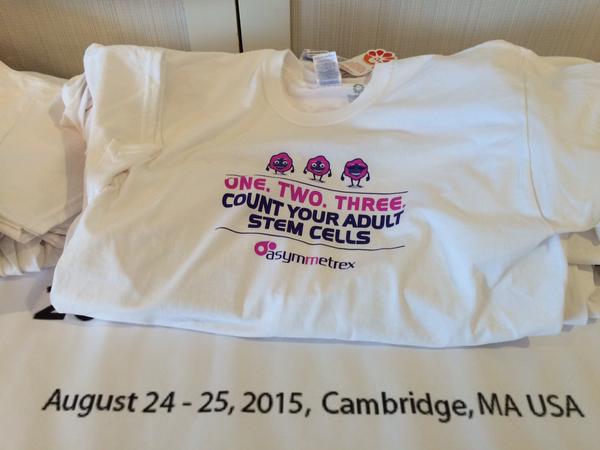 On August 24, on the first day of the 2015 Epigenomics & Metabolomics Meeting in Boston, Asymmetrex, LLC reported that, four months into the company’s planned one-year crowdsourcing campaign for counting adult tissue stem cells, all available metrics indicate that the effort is off to a good start. Although it is too early to expect the appearance of ideal success outcomes like meeting reports and peer-reviewed publications by crowdsource participants, electronic measures of the level of engagement of the stem cell research and stem cell medicine communities indicate growing interest and involvement.

The 2015 Epigenomics & Metabolomics Meeting in Boston was an ideal scientific venue for Boston adult stem cell technology start-up company Asymmetrex to share the first report on progress with its crowdsourcing campaign designed to evaluate rapidly and widely the capabilities of a new biomarker for counting adult tissue stem cells.

With a name like “H2A.Z asymmetry,” the new biomarker would require detailed explication for many other stem cell investigators. However, at this meeting, Asymmetrex Director James L. Sherley skipped over his “H2A.Z background” slide. This audience of experts in epigenetics, and in many cases stem cells as well, required no introduction to H2A.Z, because of its well-known role as an epigenetic regulator of stem cell function.

H2A.Z asymmetry was chosen as the poster child for the crowdsourcing campaign because it has two remarkable levels of “pattern-specific” tissue stem cell identification. First, immediately after a stem cell divides to renew itself and produce a non-stem tissue cell, H2A.Z is only detected in the stem cell. Second, before a tissue stem cell divides, H2A.Z is only detected on the chromosomes that have the oldest DNA strands, resulting in its unique asymmetric detection pattern.

Director Sherley emphasized that H2A.Z asymmetry – itself a remarkable first – was only one of 85 potential adult tissue stem cell biomarkers within Asymmetrex’s technology portfolio. Half of the other candidate biomarkers examined so far also show the first level of pattern-specific tissue stem cell identification. The company holds three patents that cover this rich trove of biomarkers capable of counting adult tissue stem cells in any organ or tissue in any mammalian species. And that is why the company embarked on a crowdsourcing approach for commercial development.

Asymmetrex is using the crowdsourcing campaign to raise awareness, not money. Sherley reasons, “If the biomarkers are as able as we project, commercial success will follow in many areas.” The company is using its lead biomarker, H2A.Z asymmetry, as the first enticement. The now published procedure can be easily performed with commercially available reagents; and the positive result is unmistakable, looking like a bright crescent moon phase. By engaging stem cell research and stem cell medicine investigators initially with provocative H2A.Z asymmetry, Sherley predicts that other members of Asymmetrex’s set of 85 candidate biomarkers will be explored as well by other investigators, giving the company valuable information and exposure much earlier than could be achieved by the usual sluggish dissemination of most scientific and clinical data.

Since the launch of the campaign in late April, Asymmetrex estimates that it has contacted more than 10 million relevant investigators using social media strategies. With time, the company’s participant targeting has become more refined with a Twitter target audience of nearly 300,000. Sherley cheerfully shared with the audience, “We are fairly certain now that we are reaching the right investigators.” He followed this assurance with data showing that the conversion rate for the Twitter population was >1% since early May. Generally, conversion rates of 0.1% are considered good.

To date, contacted investigators, who responded by visiting Asymmetrex’s website page for the campaign, converted to its H2A.Z asymmetry information page at an even higher rate (13.4%). Though a certain underestimate, nearly 200 independent contacts have now advanced to visiting the crowdsourcing information page. Responding visitors expressed interest in counting tissue stem cells in adipose tissue, bone marrow, prostate, heart, and “numerous tissues” in species including rats, mice, dogs, horses, birds, and moose. Sherley says, “Birds would advance the counting technology to other vertebrates, which is plausible. But moose? I hope that one proves serious and the best case!”

Sherley ended his report with Asymmetrex’s new campaign slogan, “One. Two. Three. Count Your Adult Stem Cells.” The company provided meeting participants with free cotton T-shirts bearing the slogan. Questions and comments from the audience were brisk and enthusiastic; and later most participants left with a T-shirt.